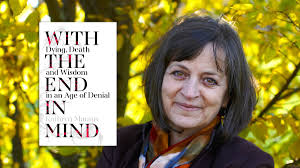 At the Edinburgh International Book Festival and Death on the Fringe, Aug 2018

“The ‘d’ word” – a topic that was once part of everyday conversation in the Western world – makes us uncomfortable. In fact, many avoid using it at all costs and instead refer to ‘passing away’ or to ‘loosing someone’. It is the ultimate leveller (we will all get there sooner or later), and yet we are embarrassed and awkward if we have to refer to it, especially with the dying person themselves or grieving relatives.

Dr Kathryn Mannix however, is not discomfited by death, no not at all. In Being Mortal (a Death on the Fringe and an Edinburgh International Book Festival event at the same time) she launches in with direct questions about who has planned their funeral or spoken to loved ones about end-of-life care. At two Edinburgh events she receives an almost 100% response rate to the first question and notes how unusual we are, so perhaps things are changing. She is on a mission to reclaim the word ‘death’ because, “if we stop using this language we can’t do precision or actual reality when someone is in the process of dying.” And that means we cannot reassure them (which is something she is really good at) after receiving a terminal diagnosis, or find ways to give them the chance to “be the person who they are” without fear or pain getting in the way.

Sarfraz Manoor is Chair for this Book Festival event, and introduces her as a ”palliative medicine pioneer”, stating that the session will form part of a “conversation about life, death and the space between them” which her book, With the End in Mind (2017) is concerned with. A top-level physician and Cognitive Behavioural therapist, Mannix has obviously been a mover and a shaker in the National Health Service and tells us poignant and amusing stories about her early days in training and on the ward. She is keen to recognise her teachers and acknowledge fellow contributors such as Canadian neuroscientist Adrian Owen, who was billed but unable to attend today.

Mannix is well practiced in explaining the likely trajectory of death, has clearly thought through her beliefs and ideas, and listened to many. She appears to be unflappable with a hint of the patronising, but that may be a manner she has had to develop as a woman of this status in the NHS. The knowledge she shares is prodigious, and at times she speaks with real compassion. She is fluent in this dialect of death, and her presentation seems to be touching a chord, receiving nods and murmurs of agreement from listeners all round. There is many a wet eye in the audience and she knows and names it.

With the End in Mind is published by HarperCollins