At the Edinburgh International Book festival August 11 2018. There are other events in the Revolting Women series – here is the link

We Shall Fight Until We Win’, A Century of Pioneering Political Women, the Graphic Anthology is at the centre of the Book festival event on 11 August 2018, which looks at the Graphic Novel of Women. Representatives from both Glasgow based BHP Comics and 404 Ink join Chair, Jenny Niven who is Literature Director at Creative Scotland, to discuss this newest disruption in contemporary publishing and the place of this book in the oeuvre of women’s non-fiction. The micro-comic art book publishing and the graphic novel sector are also discussed.

Asking about the genesis of this “slim but powerful volume”, Niven encourages Laura Jones, co-founder of 404 and contributing writer of the Nicola Sturgeon strip, to expand on the way it was crowdfunded through a Kickstarter project, and she stresses the impressively short timescale (nine months) in which they turned it around. 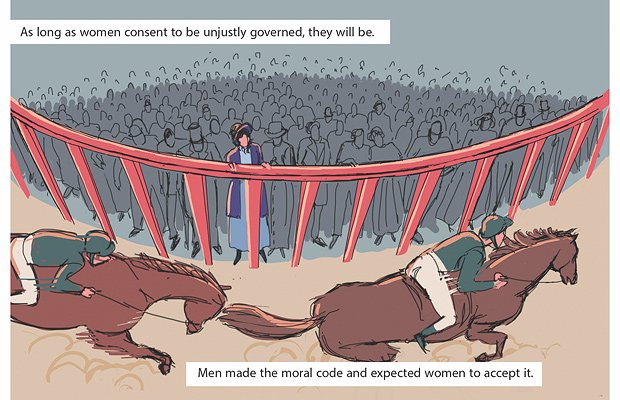 Heather Palmer, marketing and PR Officer at BHP Comics talks about the potential of the volume to make social change and how it gets women into publishing for the first time. “The great thing with visual work like this is that it is a sort of shorthand” describing how the setting and clothes for example do not need to be spelled out and are therefore easily accessible to school children, which is why it has been directed at schools as well as the general public. Heather mentions that “women are buying it for when their daughters grow up”.

Ever since the Stripped theme began in 2014, graphic novels have been “a really important, joyful part of the festival” Roland Gulliver, Associate Director of the International Book Festival who grew up with 2000 AD and Spiderman, told me. “There is an enthusiasm in the publishing sector”, he went on, “they love being part of an International literary event like this, not being ghettoised”.

“This is not a superhero book, no spandex, so sorry about that” says Sha Nazir, art director at BHP Comics, but the women collected here (Emmeline Pankhurst, Beatrice Webb, Noor Inayat Khan, Betty Boothroyd et al) may well become superheros for the next generations as a result of this book.

See also, the Revolting Women series at the Book Festival.