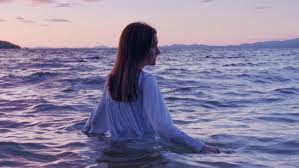 A stunning film in both definitions of the word, Kathleen Hepburn’s best known film is also painfully realistic. Very gradually, we come to understand how desperately challenging Judy’s life is. Shirley Henderson brilliantly inhabits the body of someone with Parkinson’s – the gait, the gestures, the voice – and evinces incredible pathos as a result. Her 18 year old son, Jamie (played by Théodore Pellerin) is the other key character in this Canadian feature, and he, too, is deeply immersed in his role so that we squirm when he is embarrassed and cry when he cries. It is no wonder Hepburn has won a whole raft of accolades for this.

Gently, the extent this illness has on Judy’s life unfolds. Set against the exquisite, quiet backdrop of the water and hills, icy forests and snowy roads of Alberta, the physical pain and mental challenge is terrible. The setting or rising sun, rose-glowing at the horizon, may be indicative of the atmosphere in the home, but it is never overly obvious. This is because we are slowing down with the pace of the film and increasingly mindful, unable to avoid empathising with what is taking place.

As if Judy and Jamie do not have enough to contend with, they must also deal with death and consequent grieving (there are marvellous views of the simple funeral chapel); bullying around heavy machinery; drug taking; an unpleasant sex scene with a prostitute in a tiny portacabin toilet; teenage pregnancy and the inevitable questions about sexual orientation – although I thoroughly enjoyed the candid, awkward conversations between Jamie and 17 year old Kaly (Mary Galloway) in the final section.

The opening scene of the mother in her white nightie standing thigh-high in the sea outside her lodge, and the accompanying narrative of her miscarriage and stillbirth, manages to be both light in tone and heavy in implication. Again and again, we see the cast from behind, although we might be shown, over a shoulder, a second character facing us. Often intense close up is used, so close that it can be almost out of focus, such as the upsetting, but fantastically realised, getting-dressed sequence at the end; or the camera is at ground level, for example, when Jamie and his best buddy play ice hockey: the sound and sight of the blades cutting, chillingly, through the ice.

With so many beautiful and artful images to stay with you after it ends, there is nevertheless a sense of discomfort and danger. Despite the occasional easy humour, you cannot avoid understanding something about life with this debilitating disease.