The Edinburgh Art Festival is a platform for the visual arts at the heart of the jambouree that is August in the capital. Where many may think of ‘the festival’ as being theatre and comedy, this organisation draws together all manner of exhibitions and installations, and places them centre stage.

Vital to the EAF is the Platform which supports artists at the start of their careers. Rae Yen-Song  is at the City Art Centre and the exhibition draws upon her experience as a female, Chinese Scot.

A highlight of the EAF Commissions looks to be Ruth Ewan’s Sympathetic Magick which will bring street magic to various venues around the city. Past festival commissions have resulted in permanent works, including Alison Watt’s Still from 2004 which currently hangs in the Memorial Chapel of Old Saint Paul’s Scottish Episcopal Church.

There is a growing Pop-up Programme which in 2018 involves Bill Viola’s video Three Women at The Parish Church of St Cuthbert. Looking at the topic of transfiguration, his wife and her daughters who star in the work, “briefly enter an illuminated realm”. Viola is always a stimulating view; A second event which stands out from the wide-ranging publicity is The ERRAID RESIDENCY, a stamp collection by 6⁰West in response to the life and works of Robert Louis Stevenson which can be found at The Scottish Arts Club, Rutland Square; Invisible Women give us Consensus  which “forces us to consider how gender and time shape perceptions of worth” and that is at the Urbane art gallery, Jeffrey Street; Finally Warmed Air  is a site-specific performance within the anatomy department of Edinburgh University exploring various levels of perceiving and experiencing the body. It could incorporate cadavers!

There are partner exhibitions with the Arusha Gallery, Rhubaba Gallery, Edinburgh College of Art, Sculpture Workshop, Stills and The Number Shop to name but a few, plus all the biggies, the brightest and best Edinburgh galleries are linked too. In particular check out Tacita Dean’s Woman with a Red Hat at The Fruitmarket Gallery; and the first solo UK show of Indian artist Ravi Agarwal’s Nàdar / Prakriti at The Edinburgh Printmakers.

There are Art Early events (who does not like the sound of activity trails and an outdoor picnic?) for families and children, a brilliant idea for those who rise with the dawn; and three Art Late tours doing the rounds of the collaborating galleries and including music from Jared Celosse , Ross Birrell at theTrinity Apse; and the women and men of Glasgow-based band The Ninth Wave.

As part of the Learning and Engagement aspect, there is an audio described tour with Juliana Capes including a hearing loop; and the Artist Talks incorporates the sparkling Christina Jansen on contemporary jewellery in Scotland.

The delightfully named Mud Oven Afternoons, where you can create edible sculptures, will be at the Johnston Terrace Wildlife Gardens – somewhere many will not have explored before.

Sharpen your eyesight, polish your specs and wander the circuit that is the EAF whether the sun shines or not!

The featured image above is The Impetuous Engine, 2016, film still, Isobel Lutz-Smith. 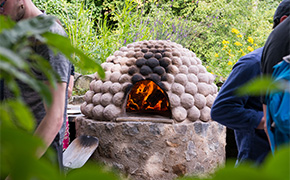