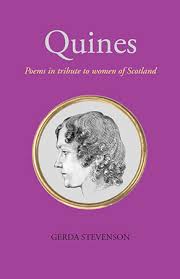 At the Edinburgh International Book Festival 12 Aug 2018. There is more in the Revolting Women series. Here is a link.

What an enthusiastic woman is Gerda Stevenson! Sitting alongside Herald journalist Jackie McGlone, she describes the inspiration for, selection process of, and reads from her new book Quines in the Writer’s Retreat at the Book Festival. Quines: meaning a lass; a woman; sounding like ‘queen’, thereby lending an “aristocracy of the spirit”.

McGlone’s eloquent introduction describes Stevenson as “A woman of a thousand skills”, she is an actress from the popular Shetland TV series, poet, writer, lecturer, singer and songwriter. Stevenson, in turn, describes the noble, reconstructed and ancient head of a young woman on the cover of her book: “…she could have been my daughter… Does history really separate us, or does it reveal how much we have in common?” 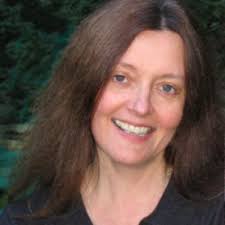 In her book (“it feels like their book” says Stevenson in that familiar way many women have of humbly attributing praise to others), she presents poems of deceased Scottish women such as Isabel Emslie Hutton, psychiatrist and doctor; Tessa Ransford, founder of the Scottish Poetry Library; Mina Ray, one of Scotland’s first interpreter trainers; and Betsy Miller, ship’s captain. Standing to deliver poems in Scots and English with an open countenance, she also includes work which honours the Gaelic, using its syntax and lilt.

In her research, Stevenson has found  women from all walks of life and from all round the country, including an entire football team. She gives these people a voice, she manages to get inside them. In Demerara, a slave girl from the plantations who has been brought to “the Black Isle of white people”, notes that “her spine stiffened in her corset when I declined the sugar.”, such an embodied, subtle and telling line. After her twins were stillborn, Mary Stuart (Queen of Scots) says, “tho milk’s ae buckin frae ma breists unner ma lace an steys”, reminding me, not just of  something I can understand as a mother, that her milk is still coming despite the deaths of her babies, but that I can actually feel, eliciting my deepest sympathy.

In a relaxed and sisterly way she laughs and shares with McGlone: “I’m a Hibs supporter”, and “I’m very interested in Robert Owen’s Utopian thinking”. She is also serious about slavery (tackling it, for example, in Terpsichore about Maud Sulter, “I’m your morning’s sport, a clandestine delight, …. but I’m only marking time; one day ….you’ll be dancing to another’s tune.”  Most of the information Stevenson gives us is in the introduction of the book, but she brings it alive with her erudite charm.

This year’s (2018) Thomas Muir Memorial Lecture will be given by Gerda Stevenson. Details here.

One thought on “Gerda Stevenson – Quines”